Made by Eric Thiermann & Mark Schwartz of Impact Production in 1982, this documentary showcases Arts in Corrections in its early days.Â  The lapels aren’t as wide, but everything in the video holds up today.

Gaining tremendous support and momentum over the past several years in California prisons, art programs are being embraced by prison administrations and inmates alike. With prison populations on the rise, programs which offer creative challenges, a source of identity, and new skills are desperately needed and present solutions to many crises unique to prison life.

“If we weigh the money that we spend having inmates work in pottery, or photography or music against what it costs us to fix the broken windows or the toilets they tear out, from the inside the art programs pay off in morale.”
Ruth Rushen
Director, California Department of Corrections

“98% of those who are sent to penal installations are eventually release. The question is do you want them release in a form with no improvement or more violent than when they went in?”
Henry Mello
California State Senator

“These people (inmates in the arts programs) are easier to deal with. They have an outlet, and their tension is release in a constructive way.”
S. Moses
Correctional Officer, San Quentin

ART & THE PRISON CRISIS, a brand new documentary film, is a success story about creativity and its role in rehabilitation. It incorporates in less than a half hour information which is tremendously helpful in encouraging state officials and prison administrators to open their doors to art programs, so inspiriting to inmates. It presents a viable and cost-effective alternative to release inmates back into society who have not gained the self-confidence necessary to resist pressure and temptations to return to a life of crime.

___________________________
Photographed in penal installations throughout the State of California, ART & THE PRISON CRISIS depicts the activities, interviews, and artwork of inmates whose lives have been changed by art projects in prison. State officials, program directors, and prison administrations verify the statements made by inmates and prove that the experience of the punishment can also be an experience of the restoration of humanness.

Directed and Photographed by Eric Thiermann

Impact Productions is a full-service video production and distribution facility in Santa Cruz, California. Its recent documentaries include a study of inspiration in ceramics CLAY: LIVING WITH THE PROCESS and the much acclaimed film THE LAST EPIDEMIC: MEDICAL CONSEQUENCES OF NUCLEAR WEAPONS AND NUCLEAR WAR.

The William James Association is a private, non-profit organization dedicated to community service projects. It is the founder of the California Prison Arts Project. 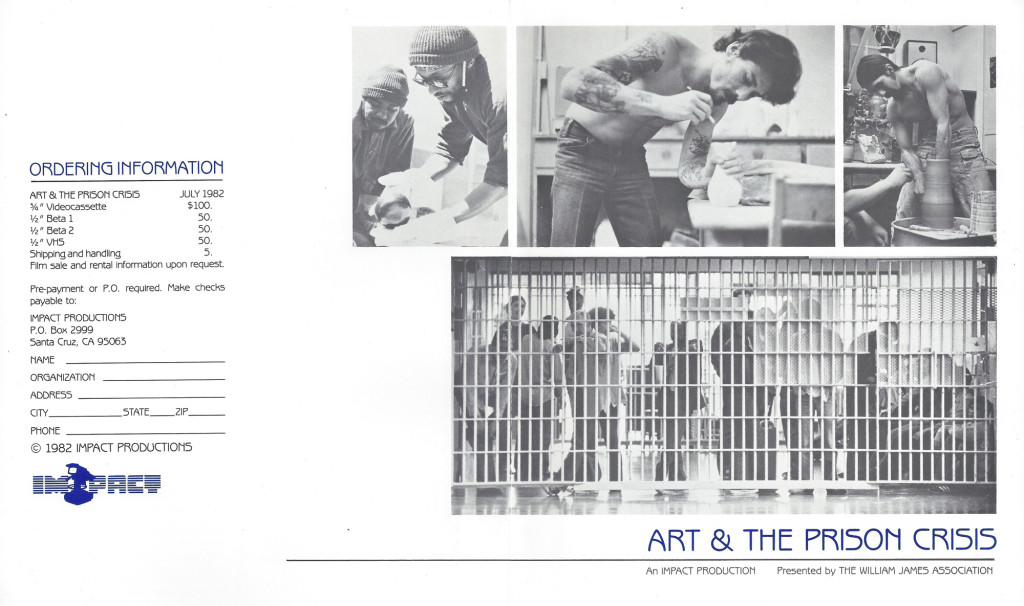 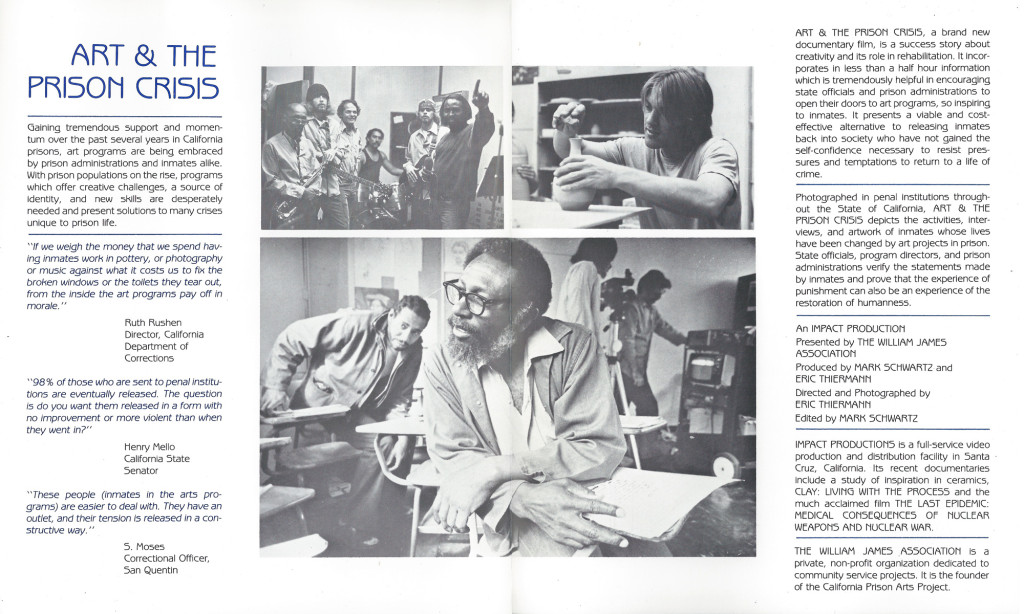 In support of the Prison Arts Project